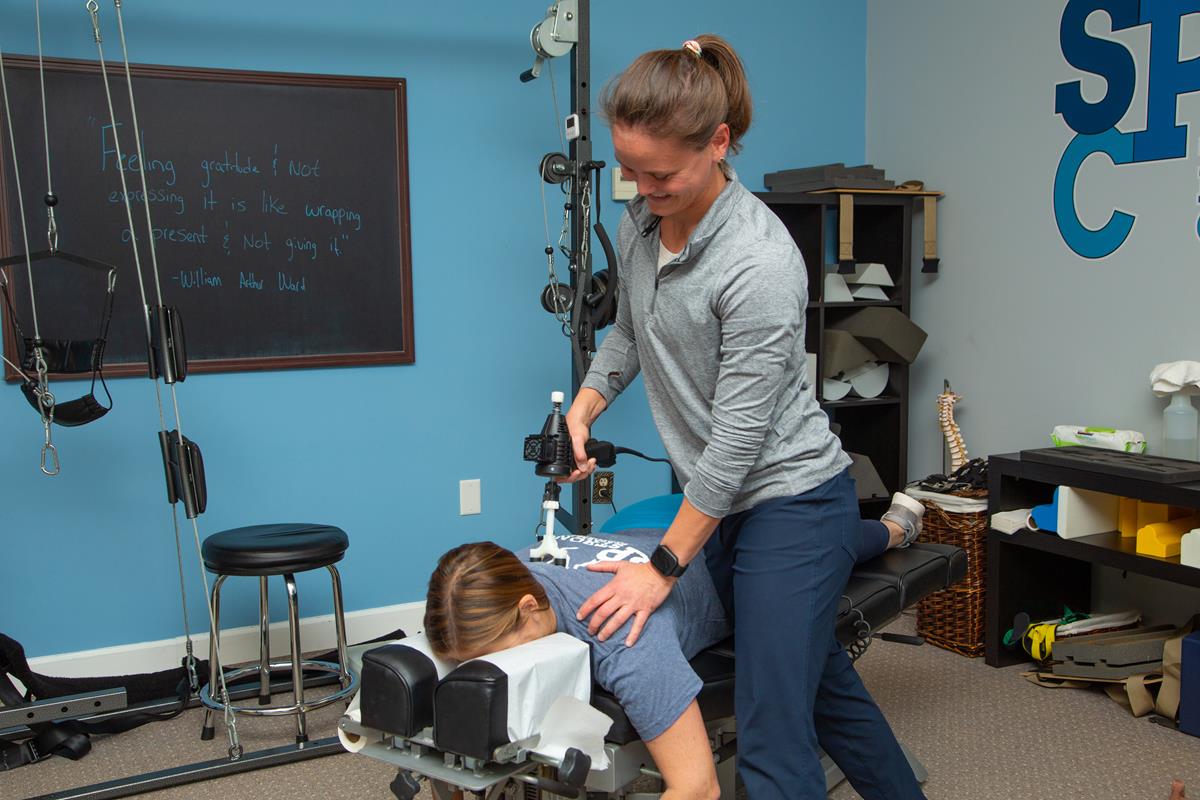 The Doctors of Strong Performance Chiropractic

Both doctors graduated from the prestigious College of Chiropractic at Life University located in Marietta, GA. They forged a personal bond early on at school while taking classes, researching, and studying. The docs went separate ways post graduation, but after gaining valuable working experience at other Chiropractic offices they ultimately made the decision to open their own office. Combining Chiropractic Biophysics and Functional Movement Systems, Drs. Poulin and Menton built the powerhouse office known as ​​STRONG Performance Chiropractic.

The summer before her Senior year at Providence College, Dr. Chanelle “Nellie” Poulin was mis-diagnosed with strep throat. The MD gave her a prescription for antibiotics without taking a throat culture. “He looked at my throat and said, ‘that’s strep throat, no need for any further testing.’ Three days later, I was covered head to toe with hives due to an adverse reaction to the antibiotics. As it turns out, I was allergic to the antibiotics. To top it off, I did not have strep throat; I had mononucleosis, which you do not take antibiotics for!!!”

​At this point, Dr. Poulin was very frustrated with traditional medicine and she started researching alternatives to traditional medical care. As she started looking further into holistic health care, she stumbled upon chiropractic and was surprised about what she found. “I had always been under the impression that chiropractic served the purpose of getting you out of pain. I had no idea that there was a bigger picture. It was exciting to learn that chiropractic helps the body’s organs function optimally.”
Although she was excited about finding her calling in life, she was a little let down at the same time. Why did the chiropractors she saw growing up not explain to her that chiropractic is much more than just getting people out of pain? This is one of the reasons she is so passionate about spending time to educate her patients about the spine, the nervous system, and the bigger picture of chiropractic care.

Dr. Poulin obtained a Bachelor of Science in Biology while she attended Providence College for her undergraduate studies. Most of her time in college was spent on the field hockey field where she was the captain of the varsity field hockey team, as well as a 2-time All-American selection for Division I NCAA Field Hockey. Dr. Poulin later attended Life University in Atlanta, GA, where she earned the Doctor of Chiropractic degree. Dr. Poulin is certified in CBP (Chiropractic Biophysics), Functional Movement Systems, and Graston Technique.

Outside of the office, Dr. Poulin has a passion for hockey, skiing, hiking, running, and spending time with family and friends.

Dr. Samantha M. Menton grew up playing ice hockey in Chicago around the age of 9. Ice hockey quickly became Dr. Menton’s passion in life along with many other sports. Sam went on to play college ice hockey at Plattsburgh State University but started her Freshman year coming back from tearing her ACL, MCL, and meniscus of her Left knee. This knee injury gave her a different way of looking at the proper way of taking care of your body as an athlete during warmups, cool downs, off ice workouts and proper nutrition. Sam obtained a Bachelor of Science in Nutrition and a minor in Personal training and coaching.
​
​During her college summers, Sam worked for USA Hockey at their National Development camps. After college Sam returned home to Chicago and was the head coach for Team Illinois’ U14 girls team and an assistant coach for Lake Forest College. Sam continued to work for USA Hockey after college as a strength and conditioning coach for the National Development Camps. She was offered an opportunity from USA hockey to help develop the first residency program in Finland that was designed to be the home for their U-18 National team in Finland.

After returning home from Finland, Sam found her true calling in Chiropractic care. She met a Chiropractor who treated hockey players and quickly influenced her to pursue Chiropractic. It was the obvious choice, because of the passion she has working with athletes, motivated people, and families. Sam continues to coach and play ice hockey along with many other sports and activities. Dr. Menton loves to educate others in ways of improving their quality of life through Chiropractic, exercise, and nutrition.